Impermanence, that was the word that kept coming to me yesterday and today roaming the temples of Angkor Wat, Angkor Thom and a host of smaller temples (already impermanent to my memory.)

Angkor Thom, meaning Great City, had a population of over one million in the 1200s, making it the largest city in the world at the time if those numbers are true. There’s no one around to verify this statement. Impermanence.

Now it is a UNESCO heritage site where virtually no one lives.

Did the King Jayavarman who died 12 years after he became king and never saw most of what he wrought expect this city to survive until 2015?

The earth moves under pressure minutely, seemingly unmeasurable until you can measure it. 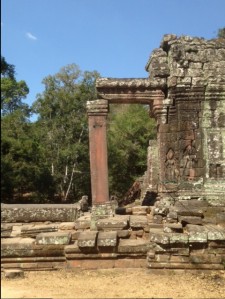 And structures need to be supported. 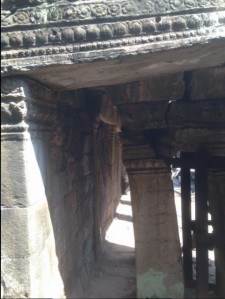 Time and weather slowly eat away at the carvings.

Trees and plants do their part of changing the man-made to plant and man-made. 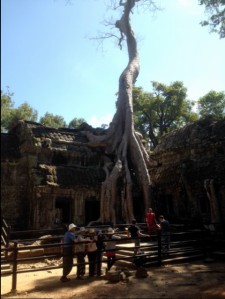 The indestructible and solid collapse under their own weight.

The guardians at the portals themselves end up missing.

And then there are the missing Buddha heads.

There are virtually no original Buddha heads in the entire complex of temples. They managed to stay with their bodies despite religious changes and wars for a thousand or more years until the 1990s. This part is within our memory. How could anyone explain to Jayavarman that a group of men called the Khmer Rouge would take over a country, kill half of its population and when it was on the run in defeat, would cut off Buddha heads. While ideology might have been part of the decapitations, apparently the main reason was that the Buddha heads were worth money. Hundreds if not thousands of heads and some times whole statues and other antiquities were stolen and sold to buy arms.

Buddhas heads for arms? Avalokitshvara, the thousand armed version of Buddha is a representation of Buddha saving all beings. Each hand has an eye to see all that are suffering.

How many Buddhas does it take to arm a terrorist? How much ivory or oil are we willing to buy to support those that wage death?

How long will we remember each desecration, each death, each indignity humans foist on each other? Charley used to be the nickname for the Viet Cong which Americans learned to kill. Now Charlie represents death in a new form with new killers and new killed.

Impermanence. Each minute, each day a new tragedy to engage us. But this is less about impermanence than it is about the five poisons. Remember them? Anger, hatred, jealousy, lust and greed. And let me add a sixth–fear. Personal tragedies bring trauma. Community tragedies can do the same. And now world events mediated through media can bring trauma on a daily basis and we become desensitized to it. Not immune to it but desensitized. We stop feeling. We become Trayvon; Je suis Charlie; We can’t breathe.

But we can breathe and do. And breathing will go on until we die and it stops. It was not until I experienced the death of the person I held most dearly, did I begin to let in the inevitability of my own death and the possibility of living with the understanding of death. And that let me out of the trauma of denial and clinging to the six poisons. It let me breathe more deeply the pains and joys of life. It allowed me to take the Bodhisattva vow to save all beings, understanding there are no beings apart from the connected one being of which we are all part. It allows me to see and feel the horror that our communal being can bring without taking on the trauma, the hopelessness, and the hated. Not perfectly, but imperfectly as all human beings manage.

Impermanence. Ironically, it will always be there.

One Reply to “Where Have All the Buddha Heads Gone (in Angkor Wat?)”