I just double checked our itinerary and indeed there was  no planned meeting with the King or Queen today. The only items were a long drive from Trongsa where we stayed the other day for a festival and a visit to the Punakha Dzong. Like Europe and churches, at some point the dzongs all start to meld into one.

They are all old fortresses, the oldest ones from 1642. They were strategically designed to hold down a large demon and so their locations were important.

Each are divided into an administrative part and a religious part. Visitors can only enter after work ends on the administrative side and must take off their hats. Bhutanese must only wear the traditional dress clothes and the men must add a special white sash as well. We could take pictures of the exterior and courtyards but not of the interior of the religious temples.  The monks get to wear monk clothes and maroon never really goes out of style, especially in layers with some occasional saffron tops.

Usually the dzong visits are relatively short. We step over a copper plated entry way through a large thick wooden door and enter the administrative courtyard. There’s a tall tower in the middle which separates the two sides with painted and usually intricately detailed woodwork around sets of windows.

You pass through around the tower to the religious side to another courtyard where there are similarly intricate windows and doorways. Near the temple entrances there are wall paintings of Buddhist iconography and cosmology.

Inside the temple are Buddhas of various types–past, present and future–are common each with different mudras or handholds indicating who they are. Buddha here is always accompanied by statues of wisdom and compassion, deities of the directions and finally accompanied by Gru Rimpoche who brought Buddhism to Bhutan. 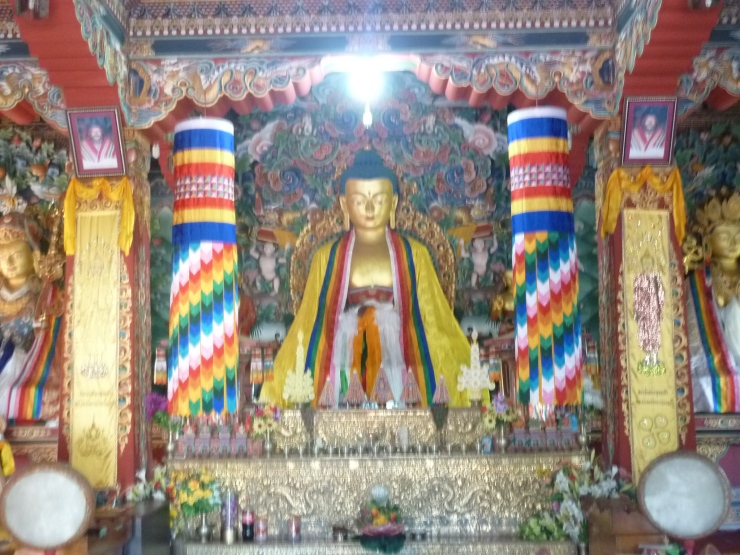 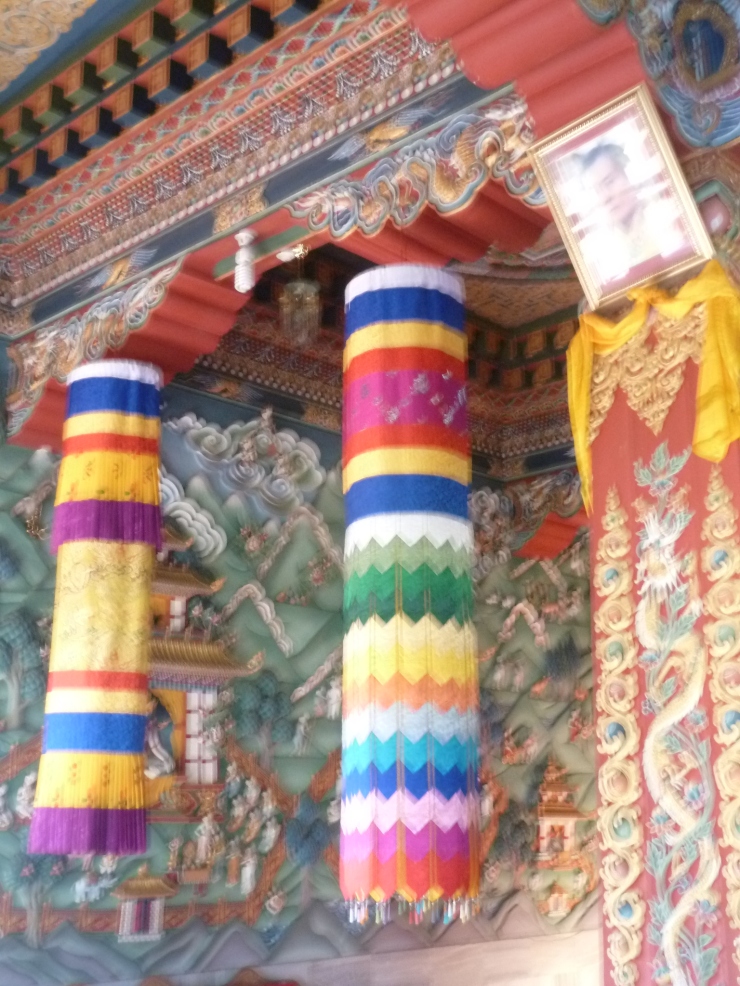 A careful reader might be wondering how I have forbidden pictures of the interior. A good story which influenced me to visit Bhutan. Last year when I was on a Buddhist pilgrimage we went to Bodhgaya where Buddha supposedly sat under the Bodi tree and was enlightened. In the town of Bodhgaya are temples built by nations that have large Buddhist populations, each in the local style. Sometimes it felt like a Buddhist Disneyland or more specifically a Buddhist It’s a Small World After All.

I was walking down the street aiming at a Japenese temple when in quite typical Indian traffic behavior a motorcycle zoomed up the street on the wrong side and clipped me from behind. I went flying forward and then down, my camera flung from my neck. Although there were a bunch of people around, they focused on yelling at the motorcyclist and demanding that he come back to see what he had done.

A very gentle man came over to check on me. I was muddy and my arm was bleeding. He found my camera which I didn’t know was missing and led me into the Bhutanese compound. I was kind of dazed and he led me to a place where I could wash my arm while he washed the mud off my camera case. He had me sit down and a second person brought some sort of salve for my wound. They gave me some water and allowed me to rest.

After thanking them, I wandered around the temple which had a bright quality with the colors ( which I now know represent the five elements).  What I know now is that they used as models various elements from different dzong temples. I recognized this first when we were in Baumtang and today discovered that the Buddha and main altar that is pictured was modeled after the Punakha dzong.

We came to Trongsa ( don’t worry I haven’t forgotten about the King and Queen) for the yearly Trongsa festival composed of lots of dancing. The morning dance was of their 8 manifestations of GRU Rimpoche and Death.

Accompanying them were directional deities recognizable by the 5 skulls on their mask representing the five poisons: anger , hate,jealousy, lust and greed. 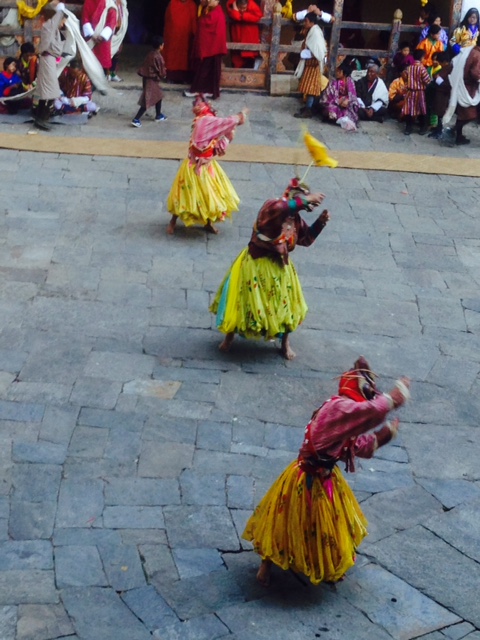 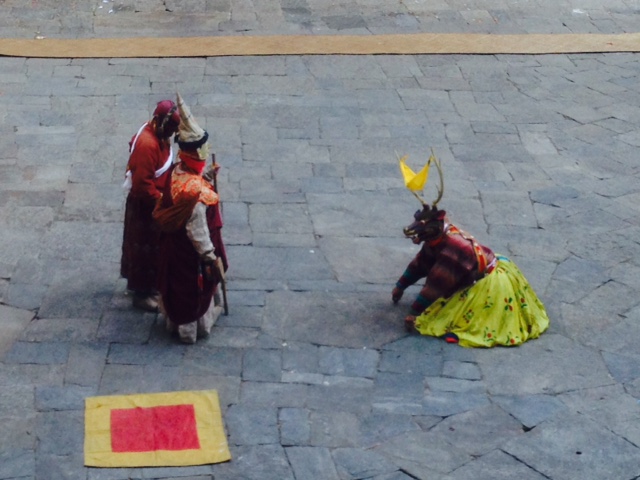 The hunter furious with what he saw tried to shoot an arrow but half way it turned around and came back to the hunter.

In the version we saw this took almost three hours.in fact the story I just described was the last 20 minutes or so. The main show was the hunter and his sidekick going about their daily business, walking the dogs, setting up an altar, having the monks bless it and serving dinner to the guests. Except for the hunter who was the straight man in this show all of the rest of the dancers/players were clowns.

This started oddly when the hunter first comes out and the clowns are congregating and clowning about. Eventually one realizes that the clown dressed sort of like the hunter is his assistant ( see below).

Whatever the hunter asks, his cassistant does it although always bizarrely. The other clowns become part of the entourage.  A lot of lewd humor which transcends culture.

At one point the clowns set up an altar and go to retrieve the Abbott and the monks.  What arrives is an hour long send up of the religious hierarchy, made more fun knowing that the clowns are all monks. The Abbott is carried in on a rail, drinks a lot, cannot keep his high cap on, likes to do do wild dances and is angry that he does not get paid enough. During this routine the tray full of phalluses and condom balloons are brought in and unceremoniously/disceremoniously distributed to selected audience members.

After this there is a dinner scene where audience members are pulled out to join in a wild meal. The man who has been picking up the garbage all day and appeared to be somewhat developmentally delayed is asked to sit on the seat of honor. After the dinner is finished in what is true Bhutanese compassionate behavior, all of the left over food was placed in as bag and stuffed in this man’s tunic as he left.

I loved how the clowns who had been roaming through the crowd all day became the center of action. And that after all the hilarity, the last scene laid out the moral to the story.

That all was two days and a few dzongs ago.  Today as we approached the Punakha Dzong to enter,

the police told us to hurry up because the king was coming. We got in and started looking around. There was only one other small group around the courtyard with us.  The police came up to us and asked us to stand near the side and not to take any pictures of the king.

A minute later a very handsome man dressed in yellow and in the most amazing yellow silk and leather boots entered through the gate. The picture below is from the internet and it is pretty much how they dressed. Did I already say, I loved the boots? 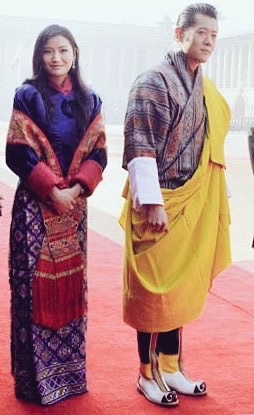 Our guide Tsering immediately looked downward as the King approached.  As he came near, Tsering stepped forward and did the most beautiful bow using the white ceremonial sash he had on.. The King stopped and came up about 10 feet away and asked in Druk if we were guests. He said yes and then the King turned to us and in English asked where we were from and welcomed us to Bhutan and hoped we were having a good time. We told him the US and yes we were. A few seconds later the Queen followed up and was just a few feet away. She repeated the question, not hearing what the King had asked. This time we answered California. She asked if it was our first time here and upon our response, invited us to return again.

I can say this without comparison that the two of them were the most handsome/beautiful King and Queen that I have ever met. And had it been on our itinerary, even with my minimalist packing, I would have dressed better.