” When a fish swims, no matter how far it swims, it doesn’t reach the end of the wayer. When a bird flies, no matter how high it fileis, it cannot reach the end of the sky. When a bird’s need or the fish’s need is great, the range is large. When the need is small, the range is small. In this way, each fish and each bird uses the whole of space and vigorously acts in every place.”–Genjokaon, Eiheiji Dogen

Imagine a favorite modern art building designed by a star architect in your city. Now take out all the art except for one piece or 15 or 30 pieces. Welcome to the new world of art on Naoshima and Teshima Islands in Japan, The  Benesse Corporation has created 4 museums, three designed by Tadeo Ando and the fourth by Ryue Nishizawa. Despite the “lack” of art in these museums, I only had time to visit three in the two days I was there. In each time move on its own pace unrelated to world time or even museum time. With so little to see, the amount of time to experience felt endless.

There will be few pictures in this blog because photography was extremely limited.  Museums as Art also meant the the ban on photographing exhibits extended to the buildings themselves. The freestanding art outside was not part of this prohibition.

The Chichu Art Museum is a Tadao Ando concrete masterpiece built into the top of a hill overlooking the Seto (Inland) Sea. From the ticket center, you walk upwards through a garden filled with flowers, trees, a stream, a pond, refreshing in the coolness of the trail on a warm humid day. The museum is entered through a long concrete tunnel and walkway that  twists and turns and takes you down some flights of steps. It was long enough to make you wonder if you missed something. Is it possible that a person can we be walking this long in an art museums without any art. Ando creates experiences for humans, not places to hang pieces on a wall.

When we do break through the maze, we are confronted with our only decision: which of the three artists, with eight works total on three floors to see first.

The Walter de Maria room is a modern ancient temple. The front wall is about 50 feet high and the room extends about 150 feet long. A massive staircase the width of the room occupies most of waht you see with flat spaces on top and bottom and a third of the way up. All white/ grey concrete. There is a lowered ceiling that has a slot allowing a direct view if the sky, while around the edges of the lowered ceiling diffused light comes through from openings we cannot see. There are no other light sources. Around the walls are 27 pairs of guided wooden columns about 4 feet high. The are arranged on the entry wall, the rear wall with just a few on the long walls.

In the middle of the central stair platform is is a 2.2 meter diameter round black marble which looks like to could roll down the steps. However it was held in place, was not apparent although once could touch it and several people tried to push it. Such is human nature. It reflects the light particularly from the slit in the ceiling.

People sit on the stairs above it and below it in quiet worship. It might be a long-lost recovered temple to the room itself. In re-looking at the brochure, I just noticed the name of the room, Time/Timelessness/NoTime.

The Monet Waterlilies room requires you to take off your shoes and don white soft slippers. The floor is composed of white miniature thick ceramics with no visible grout. The corners where the white walls meet are rounded. Again only diffused light enters the room from a lowered white ceiling; there are no electric lights. On each of three walls are hung one waterlily painting. The fourth had two smaller paintings. For about 15 minutes, no one else was there but me, the guard and the waterlilies. Being alone with such art is dangerous. I began to let the paintings speak to me, instead of the catalogue describing THE ART. I was bothered first that the largest of the works had this large reddish area blocking the views of the water lilies. In the endless time I had, I began to see and create my own stories of fire and light around this no longer serene pond. Like i said, it’s dangerous to let people alone with art, they may react.

The final room was James Turrell, the artist of light, vision and created environments. Open Skies is a large room with the ceiling open to the sky. Completely open to air, the clouds, the rain and sun. It was a dull day out, soon to rain, and  the sky white and grey just slowly moving. In the evenings, Turrell plays with our vision by bathing the walls in different hues which shockingly paints the open skies in new and vibrant colors.

In the next room was his Open Field. Up a staircase of black steps you enter a glowing magenta room which feels soft and misty, walking through a fog bank that’s perfectly clear while casting a spell on the air itself. The more you walk, the more the space seems contained yet endless.

As you walk through again the corridors, Ando leads your eye to look at the building and your reactions. The one exception to the photography ban is from where I am sitting outside the cafe where you take pictures of the scenery. 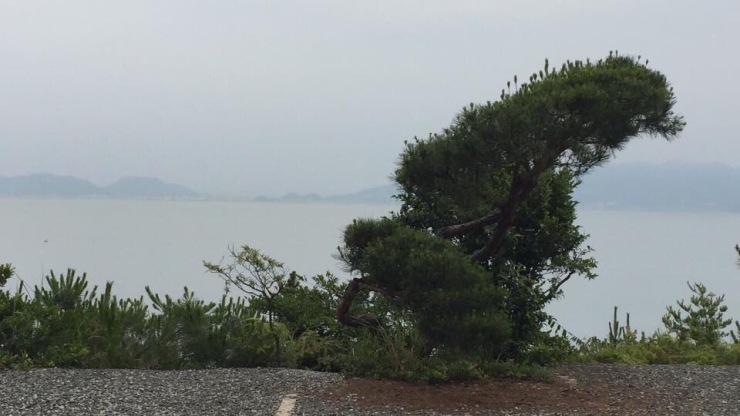 Lower down the hill is the Benesse Art Museum. Here is the view from the from entrance. 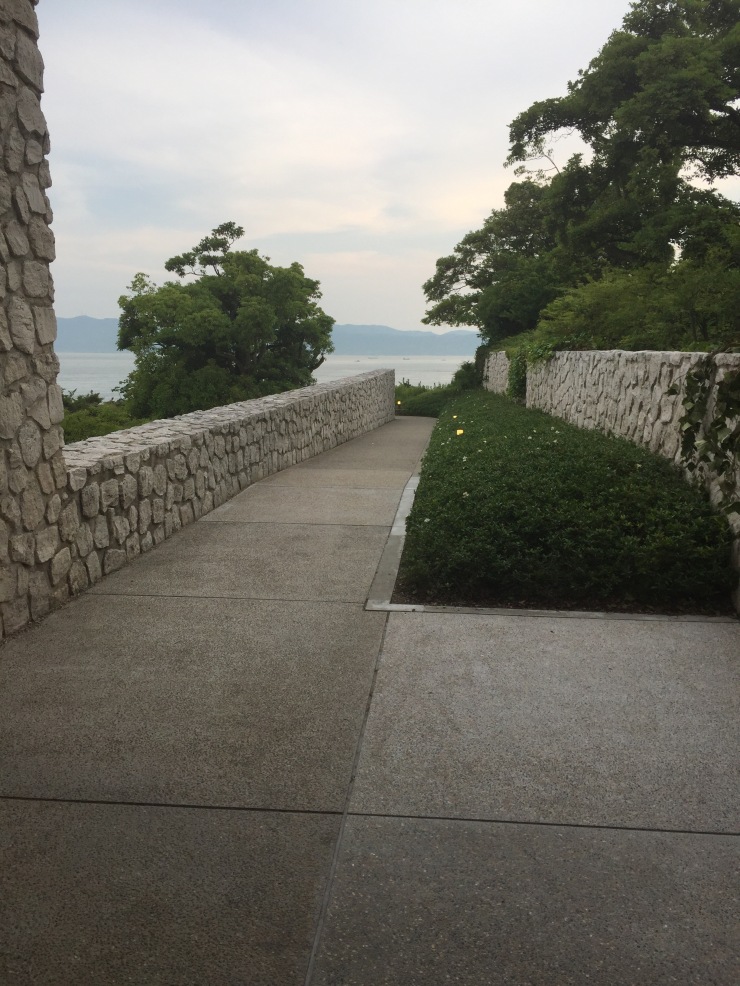 It was realively more crowded with art, 30 pieces or so over three floors. I remember three pieces by Richard Long, one ring filled with cut stone, another with driftwood from the Seto Sea and a third of two circles painted on a wall with what looked like mud.  For some reason their lack of importability struck me. That’s when I realized that they were created for the building and space so they don’t have to move.

In contrast, one of the temporary pieces was called Weeds by Yoshihiro Suda. Weeds were indeed the one thing missing from Ando’s building. All concrete has cracks and weeds are the first to grow. Now they complete the space. Here’s a picture from the Benesse website.

Outside on the grounds are additional pieces of work. 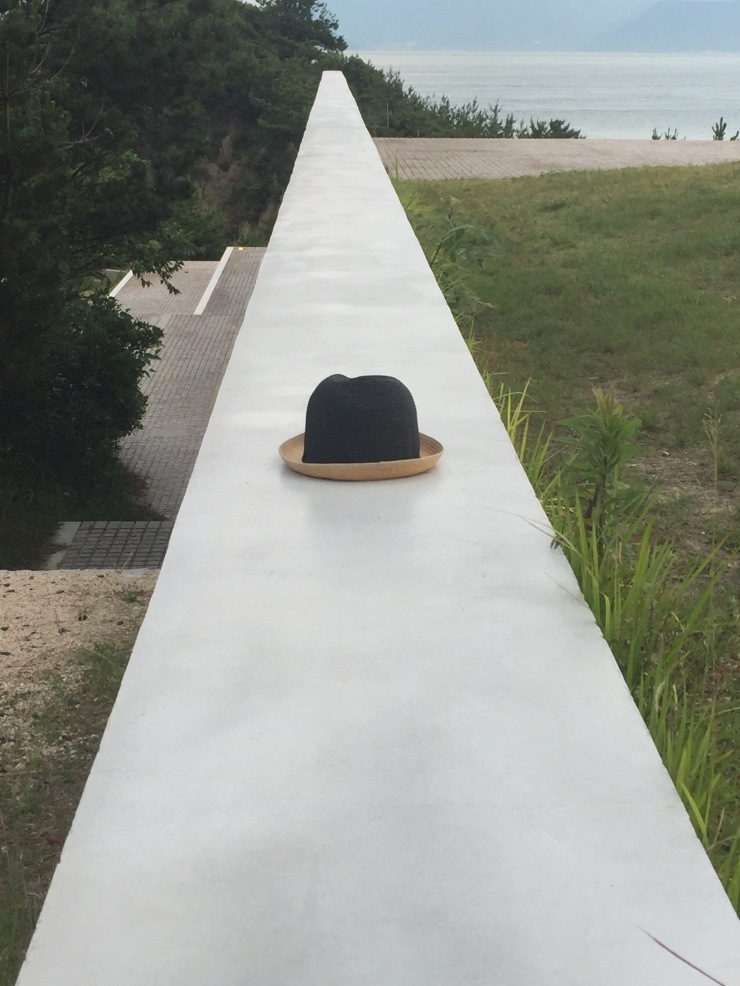 On my last day in the islands, I took a ferry to Teshima Island, the home of the Teshima Art Musuem. The museum was designed by Ryue Nishizawa and the interior piece, there’s one and only one, was designed by Rei Naito who did the Art House Project  called Kinza  which I had experienced by myself a few days before. The Museum is a white concrete shell like some sort of oblongish saucer foot ball field size with two oblong holes in the ceiling. 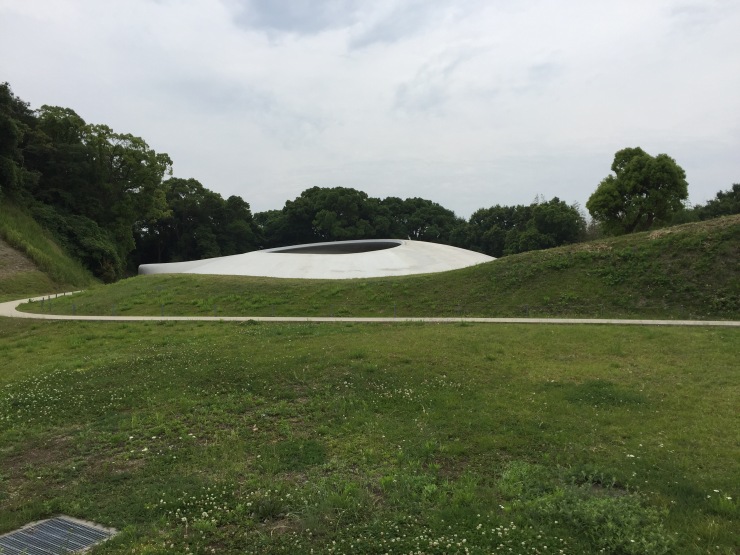 Each hole has a white ribbon hanging from side to side like an ethereal swing which blows and shimmers in the wind.  The smooth white concrete floor had tiny pinpoint holes where water exudes in drops. The drops coagulate and move following unseen pathways only known to them, sometimes swiftly like shape-shifting snakes, other times simply blobs of water joining with other blobs until that mass starts moving. There also occasional strings from the ceiling and small round white objects on the floor. We enter, as one does to temples, barefoot and can feel the coolness of the concrete through our feet. All throughout people are silently sitting some on their knees in seiza, as it is Japan and they know that position from birth, others walking sitting breathing lying in awe.