To cross a street in Hanoi, one must simultaneously heighten one’s perception while lowering one’s reactivity. One must be aware of the flow as well as the spaces within. If there is a human experience of the quantum physics conundrum of the duality of light existing as individual particles while a constant unified wave flow, Hanoi street crossing may be the closest.

The streets are filled with motor scooters with a few cars and buses, approximately 4 million of them for a population of about 7 million. The scooters virtually never stop and move at about 15 to 20 km/hour. Not fast but moving.

They are the wave never stopping, never ending. Yet there are at the same time individuals seemingly powering individual scooters making decisions on their own.

Enter the street crosser with the objective on getting to the other side to go to the cafe with the tiny small seats on the edge of the street to have a drink.

The tried and true process is to look to the left to ascertain that no cars or buses are immediately coming because they do not participate in the laws of quantum physics. They just run you over and unlike Shrodinger’s cat who was either dead or alive depending on how you looked at it and when (a famous thought experiment on particle and wave theory) , run ins with cars and buses operate on plain physics where mass and speed lead to injury or death.

Scooters operate in the quantum world so all the walker needs to do is to walk into the flow. Without paying attention (because attention will make you react and reaction will disrupt the delicate balance of existence of that moment) , the walker calmly, steadily and with his/her eyes on the intended cafe, walks into the flow until s/he is on the other side.

With the first step, the flow of scooters instantly become transformed into individual particles with space between them that was was imperceptible seconds before. They expand and contract around the walker, leaving the exact amount of space for the walker to take the right amount of steps. In my particular experience, I feel the movement of the scooters slowing down in my mind so my body briefly can occupy the space between them yet moving on to close the gap again while opening a new one. If I wasn’t not doing comparisons, I would suggest thinking of the bullet scenes in the Matrix.

In that moment, I feel everything aligned to carry me across. My mind is empty except for crossingness as my being. And I reach the cafe with both a heightened desire for a mocha and a heightened awareness of what it is to cross a street and live and celebrate living and breathing as it occurred.

Now roaming through Hanoi’s old quarter, I got to practice this over and over. Each time aware of my movement without particular awareness of what was around me except scooterness.

Why was I subjecting myself to this non-cat, non-thought experiment?

To see a street filled with store after store sewing confectionary

Or the Jewish Hello Kitty shop 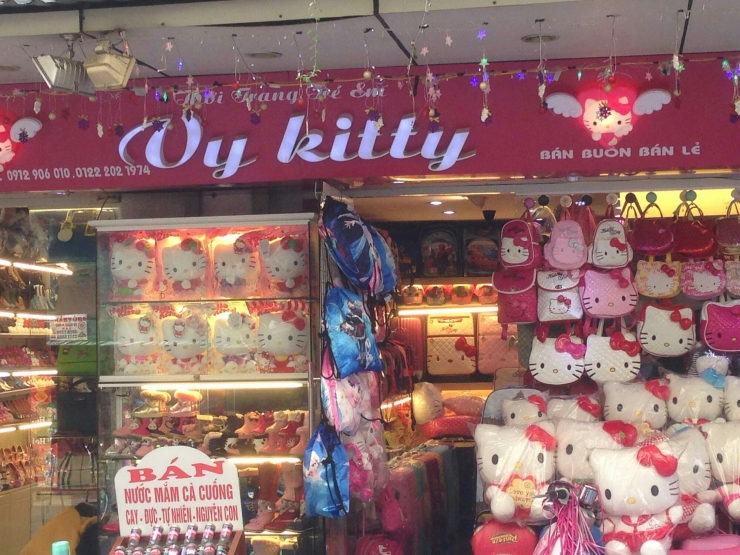 Or the water puppet theater

Or a street filled with day glow fluorescent paper liters and products to celebrate Tet, the upcoming New Year; 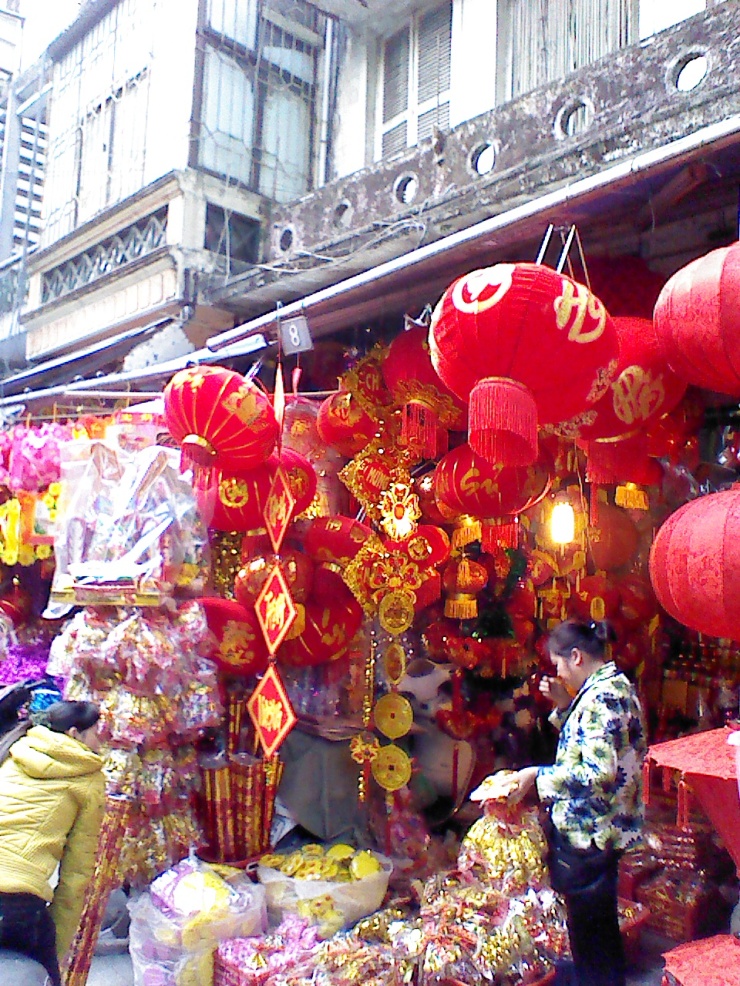 Or a street where all stores sell spices;

Or a street where tin goods are made, or bamboo products are made or wood products built;

Or will silk is sold, shoes are sold, toys are sold, jewelry is sold.

Well you get the idea. If there is a product line, there is a street in the old quarter.

Tomorrow, I will search for the camera fixing street which might allow me to post more pictures.