Impermanence update. IPhone on the bottom of Halong Bay.

Causes and conditions update. Kayak with a small leak causes wet conditions in my shorts; wet shorts cause me to take out my iPhone and camera from wet pockets and places it under my life jacket. Wet conditions also temporarily (as though everything could not be temporary)  cause said iPhone to stop functioning. Non-functioning iPhone releases me from photo demands and desires.

Sun, warmth,  vistas of the Halong Bay islands from kayak level cause attention to focus on kayaking the moment and the feeling of Halongbayness.

Floating up to our boat creates awareness of loss of the time on the Bay. Loss creates non-attention to iPhone and camera in vest. Standing up to leave the kayak and board the boat creates the conditions for the tight life jacket to decompress to allow gravity to reassert itself in relation to the iPhone and fall with a clank against the kayak. The exact angle of fall and deflection causes the iPhone to fall in the Bay causing loss of moment to become loss of object.

Mythical tale update. A victorious emperor in the 15th century Le Loi is boating around a lake in the city of what would become Hanoi. He has a magical golden sword as kings often do in such circumstances. A giant turtle, also golden, rises up from the depths and takes the sword to restore it to its divine owners and brings it to the bottom off the lake. A temple was built to commemorate the event.

A thousand years later and 130 kilometers away in a tourist is kayaking around a bay which recently became a UNESCO World Heritage Site. 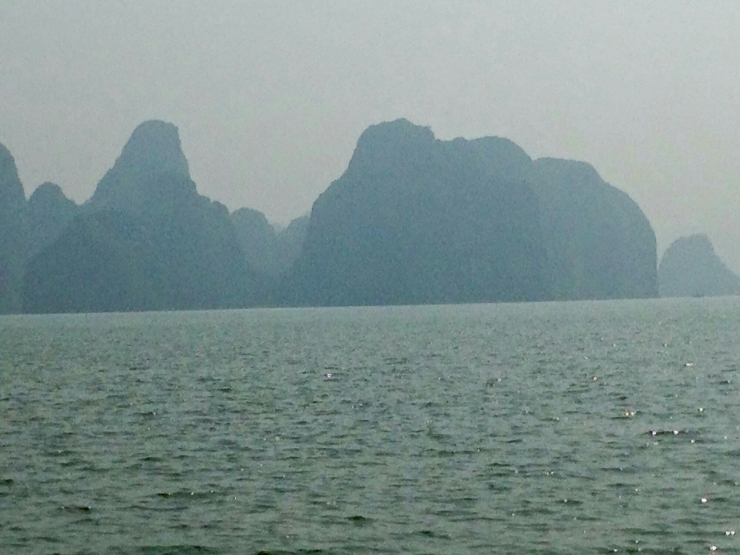 He has an iPhone as tourists often do in such circumstances. He images the giant turtle rising from the depths to offer him a golden sword. It’s a great story but instead the turtle claims his iPhone.

No one offers to dive in after it. No temp!e is built. After being annoyed by said iPhone ands it devious Appleness which causes incompatibility with all in the universe that is non-apple, the tourist resolves to end his annoyance. The turtle utilizes the great 3G service  even in Halong Bay and the unlimited data plan for  the rest of the month that was purchased for 240 ,000 dong or about $11 USD and catches up on the last available season of Orange is the New Black.

Meanwhile Halong Bay and its 2000+ islands continue to fade in and out of the mists, to lift by tectonic forces out of the sea, to erode into shapes rarely found in nature, and to inspire visions long after the disappearance of photographic devices. The real nature of impermanence is revealed.