I wrote this article for the San Francisco Bay Guardian in 1996 after four trips to South Africa. I had the great fortune to interview the major players in the movement to include sexual orientation in the new constitution. Unfortunately, this article is not currently on-line. The Bay Guardian plans to open up archives of this once important San Francisco newspaper in the future.

PRETORIA, SOUTH AFRICA- On May 8 1996 South Africa became the world’s first country to constitutionally outlaw discrimination based on sexual orientation. The Constitutional Assembly’s vote to approve a new constitution and bill of rights not only completed the process of dismantling the apartheid regime but also ushered in a new era for gay and lesbian rights.

This historic achievement can be traced to the intervention and dedication of a few key people who made the case for a more inclusive definition of equality and human rights in the new constitution.

Kevan Botha, a lobbyist for the Johannesburg-based National Coalition for Gay and Lesbian Equality, a political organization founded in December 1994, says that while most South Africans’ perceptions of discrimination were race-based, people now “can identify with the indignity and arbitrariness of  multiple discrimination.”

One of the first activists to effectively bring sexual orientation into national discussions on discrimination was Edwin Cameron. Cameron is a leading anti-apartheid lawyer who has taken part in numerous landmark cases involving forced eviction, relocation, and conscientious objection to obligatory military service. Now a judge on South Africa’s Supreme Court, which is roughly equivalent to the U.S. District Court, Cameron is probably the highest-ranking openly gay judge in the world.

During the 1980s, Cameron was especially active with the black trade union movement, then led by Cyril Ramaphosa. Ramaphosa, a likely successor to President Nelson Mandela, heads the parliament’s Constitutional Assembly, a special assembly formed after the 1994 elections to write the country’s new constitution.

Simon Nkoli, a gay student activist, has also influenced South African politics as a defendant in one of the largest apartheid trials, the Delmas treason trial. In 1984 Nkoli was arrested along with 21 other blacks for participating in a rent strike in Sebokeng, a township outside Johannesburg. All 22 spent nearly two years in Cell 36 of Pretoria Prison before· being formally charged with murder and treason.

Although Nkoli had been public about his sexual orientation before his arrest, few in the group of detainees knew that he was gay. In prison the group met daily to plan for their release. One day Nkoli came out to the group. Their reaction was hardly supportive.

“They didn’t want me to [testify],” Nkoli told the Bay Guardian; because they were worried that “state prosecutors would use my homosexuality to discredit [us] all.”

However, the long wait in prison gave Nkoli the opportunity to challenge the homophobic attitudes of his fellow detainees. By the time of their trial Nkoli had won not only the group’s acceptance of his homosexuality but also its support for including gays in South Africa s human rights movement.

Sheila Lapinski, another activist, also has helped make gays and lesbians a force in the human rights movement. In 1987 she helped formed the Organization of Lesbian and Gay Activists (OLGA) in Capetown. In 1989 OLGA became the first and only gay organization to join the United Democratic Front (UDF), the country’s leading anti-apartheid organization. This link enabled OLGA to organize discussions on gay and lesbian oppression with other human rights and political organizations, which led to higher-level contacts within both  UDF and the African National Congress (ANC).

Nelson Mandela was freed Feb. 11, 1990, after two and a half decades in prison. Soon afterward the ANC was “unbanned” by the apartheid regime, and negotiations began among the ANC and the ruling parties to form a new government. The negotiators met in the Johannesburg suburb of Kempton Park to negotiate the government transition and develop an interim constitution.

In early 1991 Edwin Cameron was called in by the ANC and the Democratic Party, a mostly white moderate political party, to help write the early drafts of the country’s new constitution. These drafts incorporated a non discrimination clause that included sexual orientation along with race, gender, ethnic origin, color, age disability, and religion.

But the day-to-day negotiations on the constitution were being held behind closed doors, and Cameron and others were concerned that the sexual orientation clause might be dropped. In response to their worries the Equality Foundation, a Johannesburg-based human rights group, hired Kevan Botha in 1992 to lobby the negotiators to keep the clause.

Cameron says these lobbying efforts were a critical juncture in the country’s gay-rights movement. He recalled one cold-Sunday evening in May 1993 when he received word that all references to specific forms of discrimination-except for race  and gender had been dropped from the draft constitution. He and Botha quickly wrote the negotiators arguing that a broad discrimination clause was too vague to guarantee the rights of those not mentioned specifically. They also wrote in their memo, which can be found on the Constitutional Assembly’s World Wide Web page, that discrimination [on the ground of sexual orientation] is often arbitrary and based on innate prejudice with no empirical basis. Discrimination in this context requires that any protection be clear [and] comprehensive.

After continued lobbying, the sexual orientation clause was put back in the draft.

At the end of April 1994 Mandela was elected as the first president of a democratic South Africa. A few weeks later the interim constitution, including its new protections for gays and lesbians, went into effect. Despite this victory, Cameron said, the struggle was far from over.

After the elections the newly elected 400-member Constitutional Assembly, headed by Cyril Ramaphosa, was to write the final version of the new constitution. Mandela’s new government also brought the constitution-writing process out from behind closed doors and into the public arena. Citizens were invited to review the interim constitution and comment on its provisions.

Members of the African Christian Democratic Party (ACDP), a religious conservative political party that received only 7 percent of the vote in the 1994 elections, began flooding the assembly with letters protesting the sexual-orientation clause. According to Botha, the ACDP has been given tactical advice from American Christian right groups. In 1994 the group circulated copies of The Gay Agenda, a video produced by a U.S. group known as The Report that depicts gay life in America, in an attempt to turn public opinion against the discrimination protection for gays and lesbians.

At this point the burgeoning gay and lesbian movement realized it had to take a more open approach to protecting its newfound status. In December 1994 a coalition of more than 60 gay and lesbian organizations formed the National Coalition for Gay and Lesbian Equality. OLGA’s Lapinski became a co-chair. The group decided to dedicate itself to a single issue-keeping the sexual-orientation clause in the constitution. Soon it became the only nonpolitical party in Capetown to have a full-time lobbyist.

In June 1995 thousands of South African gays and lesbians wrote the assembly to support the clause and to describe their own experiences with discrimination. Ramaphosa later cited many of these letters in his rebuttal to the ACDP’s claims that protection was not needed.

While the one-on-one lobbying of individual politicians continued, Botha and others worked to increase public awareness of and support for the clause, especially in the Christian, Muslim, and Jewish communities. Archbishop Desmond Tutu became an early and vocal supporter. His support, combined with the coalition’s efforts to bring the various religious communities into the debate, helped blunt the impact of the ACDP’s protests.

On May 8 the Constitutional Assembly approved the final version of the new constitution—with the sexual orientation clause intact.

Botha says he feels that as these new rights are tested, there will be both victories and setbacks. However, he added, South Africans’ expectations for equal treatment are higher than ever.

“South Africa will be the one to carry the torch of human rights into the 21st century,” Botha said. 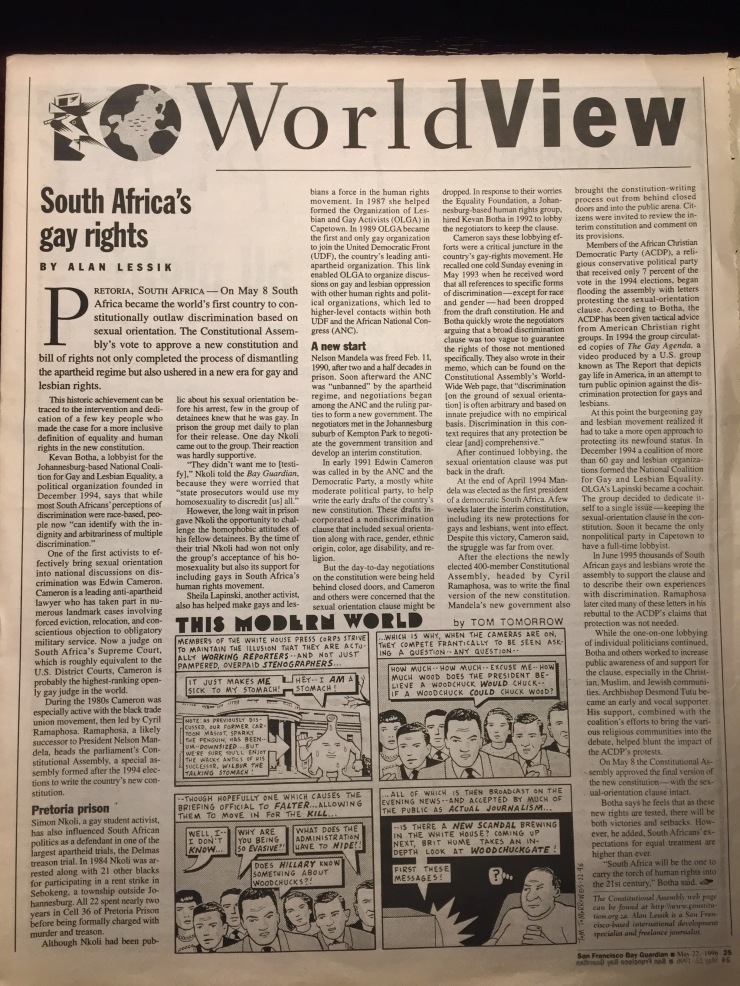